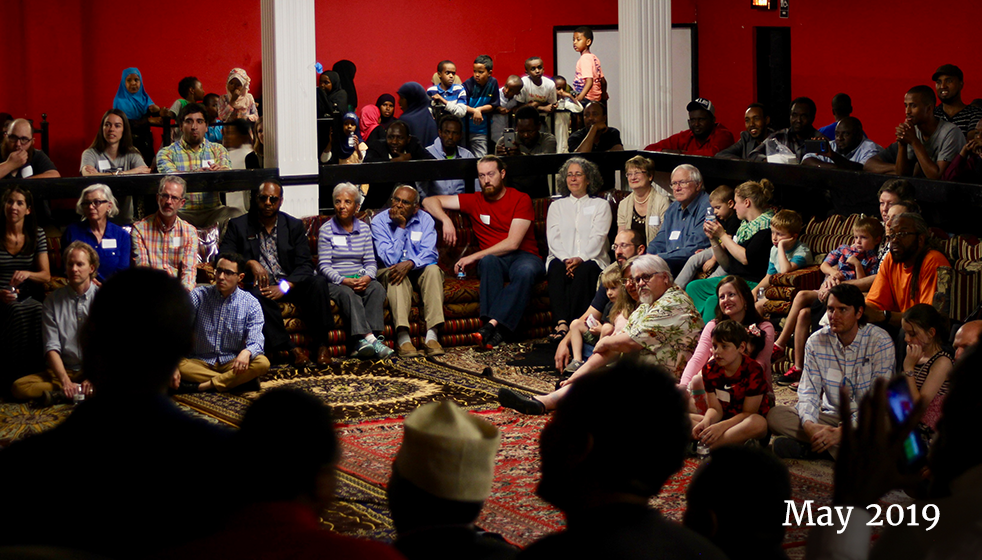 Last month we celebrated the culmination of two years of community-building among the Somali community here in Amarillo. The story in this month’s newsletter is long, but important. Please read to the end!

In response to the tragic events that took place at a mosque in New Zealand, Somali leadership decided that they wanted to fight against isolation and fear. They had just purchased an old night club next door to their mosque for expansion, and they chose to use this occasion to invite the wider community into their space and participate in a celebration.

This was able to take place because every Thursday, I sit down at a local Somali shop and drink tea with these men, chatting about world events, laughing, sharing about language and culture, and listening… Strategically, I often invite other men to participate, slowly building a web of interconnected relationships between Somali people and Amarillo’s diverse citizenry. Out of this growing community of “differents,” a safe space has developed where fear can be tackled directly through relationships. “But,” I often wonder, “how can I teach others to participate in this dialogue?” You see, many of the Somali people in our city are more afraid of us than we are of them. So afraid, in fact, that their hands trembled as they stepped foot in their own building that night, upon seeing the sea of white faces from the doorway.

The crowd grew to over two hundred people, esteemed guests were invited to the table on stage, and the program began. Speeches were given by Mayor Ginger Nelson, Chief of Police Ed Drain, Assistant U.S. Attorney Joshua Frausto, Deputy District Director Paul Simpson of Rep. Mac Thornberry’s office, Dexter Cearley of the Amarillo Fire Department, and myself, as well as numerous Somali leaders and other Amarillo residents. The theme of these speeches was that our city is made up of a diverse group of equals, that we are one community with equal rights to safety and civic participation.

Ryan told the story of Igal Shidad, a Somali folk hero known for both his wisdom and cowardice. Igal was a nomad who searched far and wide through the desert for new opportunities for his family. One night as he was traveling, he came upon a lion. He raised his voice to scare it away, but it wouldn’t budge. Since he couldn’t scare his enemy away, he retreated. Trembling in fear, he waited and waited through the night. As the sun rose, he looked up and saw, much to his surprise, a tree stump in place of the lion. In relief, he cried out…

Stump, you are one thing, and what I saw was something very different. I thought you were a lion about to attack me, but you are only a stump.

We are all afraid. We see lions everywhere! But what if many of those lions are only tree stumps? When we approach one another, we discover that the fangs we fear are just branches. They’re just hands, reaching out to clasp yours.

As I told their beloved folk story, smiles widened on every Somali face. As Somali people heard me speak in their own language, the joy they experienced could be seen on their faces. Laughter spread throughout the room. They were being honored, and they knew it.

One Somali man approached me with tears in his eyes. He had entered that room terrorized by fear. Then he heard his own language spoken from the front, and realized that the story of Igal Shidad is about him. He has been hiding through the night, afraid that the white lion will pounce on him. In this moment, as he finally reached out his hand, he found mine. Only a tree branch. By the end of the night, this timid elderly man was requesting selfies with everyone in the parking lot.

On this momentous night, people entered a mosque with fear in their hearts, and left as friends. We exchanged handshakes and phone numbers, and we held each other’s children. We broke bread together, recognizing that we are all so much more alike than different. Celebrate with me at this miraculous thing that has happened!