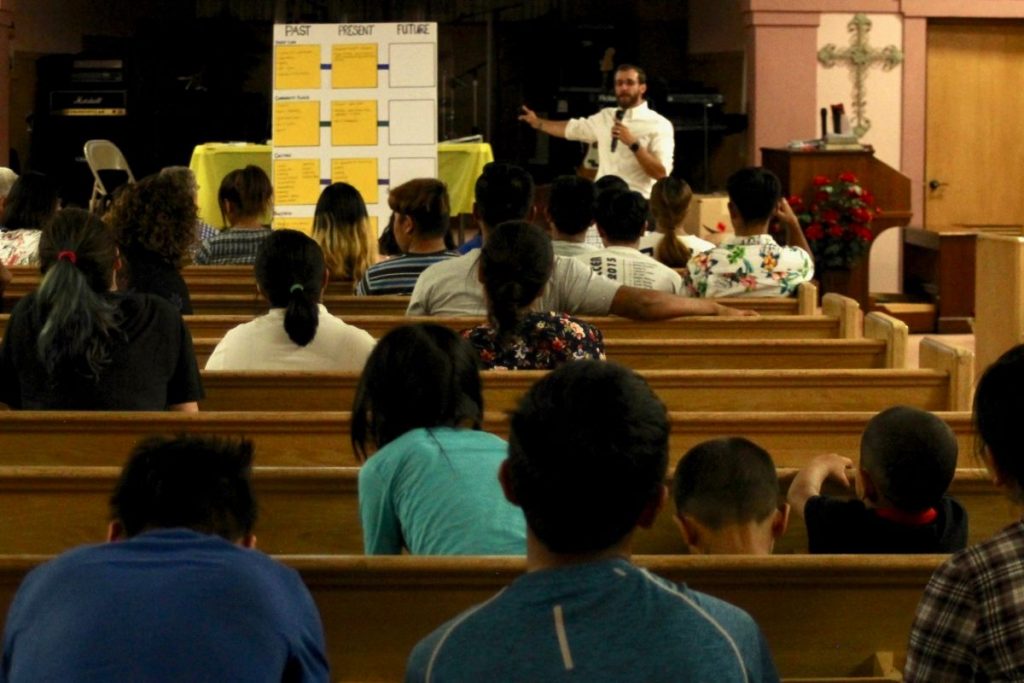 Wow! Saturday night we kicked off our revamped Table Talk program with a meeting at a local Burmese church. Around 20 volunteers met with over 30 Burmese people (primarily from the Chin ethnolinguistic group). This was a one-of-a-kind opportunity to hear directly from Chin people about their experiences here, and about what needs and hopes they have!

Working in small groups, volunteer facilitators asked questions while scribes took notes. These notes will feed into a comprehensive report of refugee needs and priorities. We asked questions about what jobs are drawing Chin people away from Amarillo, where they prefer to have social gatherings, what types of crafts and cultural expressions they are proud of, and what local businesses they own.

We learned that people often leave Amarillo for lower-paying jobs that aren’t as physically demanding. We learned about the immense importance of Chin churches as places of gathering and cultural expression. We learned that Chin people are proud of their knitting, bamboo baskets, jewelry, and blacksmithing skills. Many were involved with livestock and gardening back home, but American regulations make it difficult for them to know how to start new businesses here. They’re proud of their cultural expressions, including storytelling, dancing, Chin wrestling, and especially their fashion. In Amarillo four businesses are owned by Chin people, including 2 sushi shops and a local meat-packing plant.

Next, we debriefed as a whole group. Specifically, we focused on comparing their experiences back in their home country with life in Amarillo. This dialogue of the past (how things were) vs. the present (how things are now), prepared us then to separate again into small groups and discuss the future (how things could be). Looking at the poster at the front, we considered what opportunities are missing in Amarillo for Chin people. What needs to change?

We discussed new business that could be formed, but participants struggled with the idea of taking risks. We considered the size of Amarillo, and whether visitors would buy enough of their products to produce sustainable markets. We considered how some types of produce they’d want to grow would not interest most Americans. We discussed how a new multicultural community center could bring diversity, celebrations of culture, and new business opportunities, but that many have concerns about the time and education it would require to start new endeavors when they don’t know the way things work here.

In some ways, we left with more questions than when we first walked through those doors just 2 hours before. It was a reminder that we are here to listen, and not to solve all of our neighbors’ problems.

Our sincere hope is to show genuine care, engage in honest dialogue, and consider seriously all that we hear this semester. We pray that this ongoing dialogue will catapult us into creative solutions that build community, offer hope, and equip leaders to solve problems.