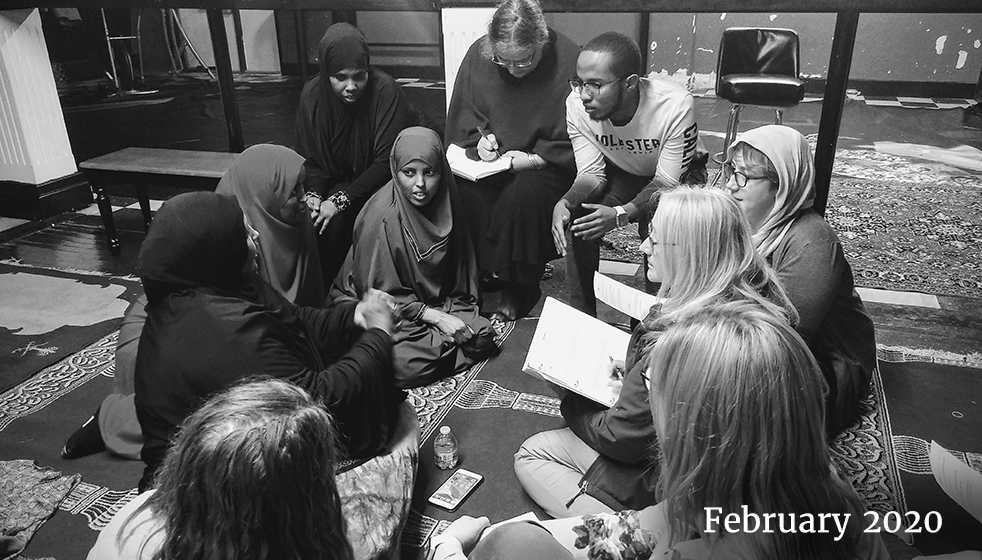 Earlier this month we participated in something extraordinary. We met with 37 Somali leaders in order to collect their thoughts and ideas regarding four primary areas of concern: the development of new businesses, obstacles for adult education, how to celebrate their culture here in Amarillo, and the pros and cons of establishing of a multi-cultural community center.

Ryan told the Somali folk tale of Qayb Libaax (“The Lion’s Share”), in which animals offer up various ideas about how to divide up the meat from a camel they killed. A hyena suggests all the animals taking half, and the lion (the leader), taking the other half. This suggestion isn’t enough for the greedy lion. Next a fox gives her idea. Half goes to the lion, and of the half that is left, one quarter goes to the lion. Out of the remaining quarter, an eighth goes to the lion, and on it goes. In the end, the lion gets everything, while the rest of the animals fight over the crumbs. The moral is that leaders usually get too much or too little.

Ryan asked, “Who is the lion?” The Somali audience answered, “We are all the lion. We are all greedy.” Ryan reminded everyone that our purpose at these meetings is to hear from them so that they have a place at the table. One person is not making the decisions. As long as they speak up and participate in this process, they will all get their share of the results. This conversation laid the foundation to discuss community needs and a community center.

We divided into five small groups, each with a facilitator and a scribe to take notes. As we talked, we learned some important things. We learned that some Somali men are traveling to Nebraska to take truck-driving classes rather than attending a local program! We learned that there is a big desire for a neutral gathering space like a coffee shop, as well as opportunities to sell handicrafts and other items. We learned that the community is desperate to get the speed limit lowered on the street that runs by their mosque. We learned that a lack of childcare is their biggest obstacle for adult education.

Where is this all going?

So what did we accomplish at this meeting? Where is this all going?

1. We now have a written record of the responses to our questions from many different refugee communities. All of these will be highlighted in our upcoming report: “Strategic Plan for the Refugee Communities of Amarillo.” Look for the report later this semester.

2.Members from three local institutions joined us. They are in a position to enact change right away! We had 6 staff from Amarillo College, 2 from Amarillo Independent School District, and 1 from the Amarillo Museum of Art. This is not just talk. These people were taking notes so they could connect their resources and ideas with real people!

3. Thirty members of the broader community spent three hours on the Somali mosque floor in a posture of learning. The Somali community applauded us at the end, recognizing that we sacrificed our Sunday night for them. The importance of this cannot be understated. They know we care. No one else is valuing them with their time like this.

4. Ryan could have taught a Somali culture lesson to those 30 volunteers, but they’d remember just a fraction. Instead, these three hours will settle as a memory they won’t forget. They will now be agents for change in this community. They’ve eaten the food, learned the names, shaken the hands, and heard the answers first-hand!