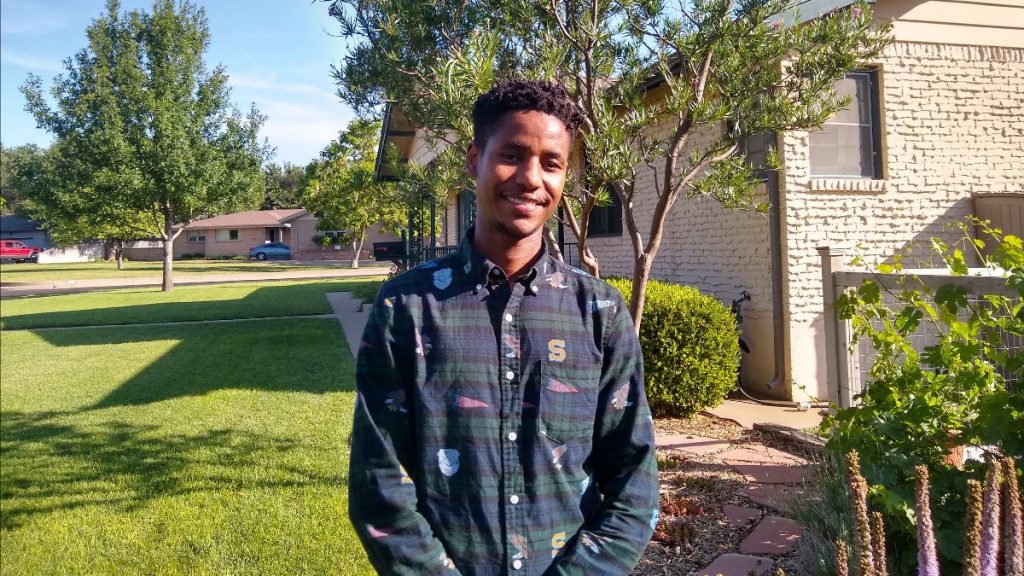 One example of the impact of our relational approach is Samuel. This is the best story, so read it all! He came as a Congolese refugee in 2018. He was young, fatherless, untested in our cut-throat Western world, and his résumé was empty. Yet Samuel was full of ambition and hope! We connected Samuel and two other young Congolese guys with Adrian in our Face to Face program. The point was just to establish a friendship and see where it goes.

Since that time, I had lost touch with Samuel. Apparently he had gone to Job Corps to get his diploma, and then returned to Amarillo to begin attending classes at Amarillo College while working nights at an assisted living facility. He lives with his mom, who works for a meatpacking plant.

When the COVID-19 pandemic struck, I quickly needed to hire over a dozen interpreters for full-time contract work. The city’s health department was desperate to make thousands of phone calls to refugees who were being sent home from meatpacking plants with positive test results. I asked Samuel to come to my house to discuss the opportunity.

I learned all about Samuel that day. When he was young, his father died of alcoholism—like so many men facing the pain of a country in turmoil. And like so many children, Samuel dropped out of school to care for his family. Thankfully, a pastor, wanting to give him another chance, paid Samuel’s school fees. Samuel took that opportunity and ran with it, completing grade after grade and learning English in the process. Samuel’s past proved that he wouldn’t waste an opportunity. I wish that pastor could see Samuel now.

Samuel and I prayed together on my porch, asking God to provide for him and impact the world through him. Then I told him I’d be paying him over three times his current hourly wage. He broke down in tears expressing his thankfulness. For the first time, Samuel’s skills were being recognized—he speaks French, Kinyamulenge, Swahili, and English. He is also certified in phlebotomy, as an EKG technician, and is taking computer systems courses. I told him how important he is in our city and our world. I reminded him that he has been blessed in order to be a blessing to those around him. Don’t hoard the blessings!

Samuel worked so hard each and every day for the city’s health department, making phone call after phone call to sick and confused people. Always on time, always putting his personal phone away, always smiling, always respectful. Do you see where this is going yet?

When a local news station wanted to get the scoop about the interpreting work, I told them they needed to stop talking to me, and talk to Samuel instead!

I wasn’t the only one who couldn’t stop talking about him. His supervisor at the health department was so impressed by him that she called her sister, who happens to be the principle of the most diverse elementary school in our city. Eastridge Elementary School just hired Samuel as a Teaching Assistant. Now Samuel has a full-time job caring for young Congolese boys and girls, and bridging the gap between African communities and the school district.

This is how a simple friendship has empowered structural change. Samuel’s résumé won’t fit on one page for long, and he’s poised to impact our city and our world. As a leader, don’t you think he’ll be much more capable of bridging deeper divides? I’m not sure he even needs us anymore… And that’s how it should be.

What about the other interpreters? Combined, they’ve put over 2000 hours into serving our city. Who will be noticed next?