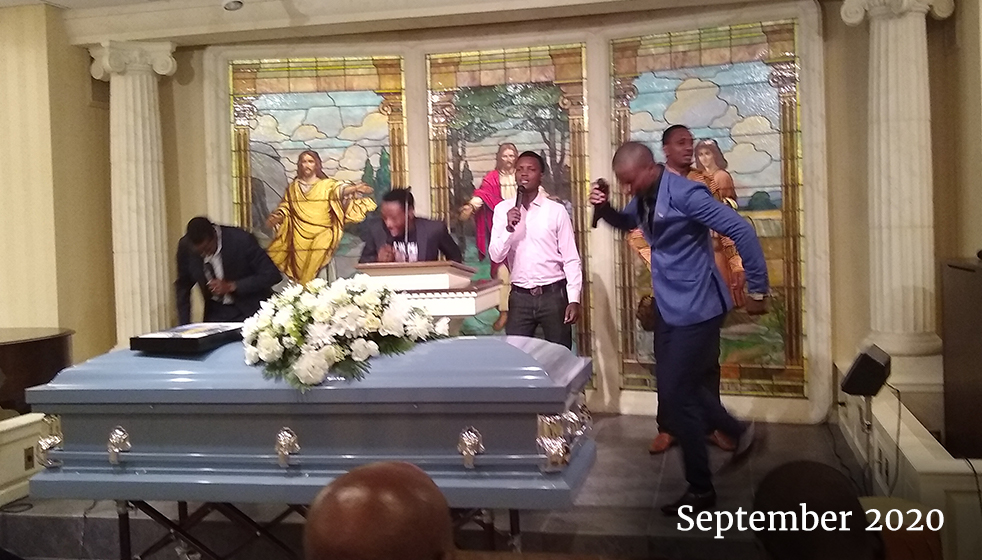 In our last newsletter, I told you about Samuel, who started out as a mentee in our Face to Face program before I hired him as an interpreter for the city’s health department. Next, the school district hired him to work in a local elementary school—serving as an important bridge for African students and families. What a story of success! In the midst of these successes though, Samuel’s sister-in-law tragically passed away from a sudden seizure. Yvonne had been married to Samuel’s brother, Seth, for only two months. She was 25 years old.

For a community that has known so much tragedy already, this was just so painful. I was curious to know what the grieving would look like, so I was glad to be invited to attend the funeral at First Baptist Church. I had been praying for this community, pouring my heart out to God: “How can they suffer any more losses? How could this tragedy befall them?” I walked into that chapel with downcast eyes, ready to be overcome by sorrow at such a heavy loss. A man was playing keyboard from the front, while another was singing. I walked slowly down the aisle and sat directly behind Seth, and I watched and waited. Over the next hour, I was indeed overcome—but not by sorrow as I had anticipated.

As people filed in, the music went on and on, with increasing intensity. Sometimes they’d stop and pray, or someone would share a few words while my neighbor interpreted for me: “They are saying that death will not stop us. Every tear will be wiped away. This pain will not last. We are people of God. We do not mourn forever. Today is a day to praise God!”

With each new song, new people stood up, raising their hands in praise despite their broken hearts. This funeral was not about Yvonne. It was about God! Slowly, with each passing song, more and more people were standing and dancing. It wasn’t long before I was dancing too. Let me be the first one to tell you that I’m not a dancer. Yet this was a time for celebration, because the grave wasn’t powerful enough to hold back the joy in that room. I couldn’t contain my own joy, even as the widower sat inches away.

With each song, additional men joined the group of dancing leaders at the front. As they danced, they stomped and twisted their feet—a picture of their attitude toward death. They showed absolute disrespect for death, because with God they know they have life forever! On that beautiful Saturday morning, it was obvious to me that these men and women believed that they are spiritual beings, and that a casket can’t stand in the way of that spiritual reality.

Today, be reminded that the refugees in our midst are not in need of our pity. Many aren’t in need of our help at all. In fact, it might just be that we’re the ones who need to learn from them!

Click on the link below to watch a few video clips of the singing and dancing. The last 30 seconds are the best!

Here is the passage that was printed in the program:

Then I heard a voice from heaven say, “Write this: Blessed are the dead who die in the Lord from now on.” “Yes,” says the Spirit, “they will rest from their labor, for their deeds will follow them.” –Revelation 14:13