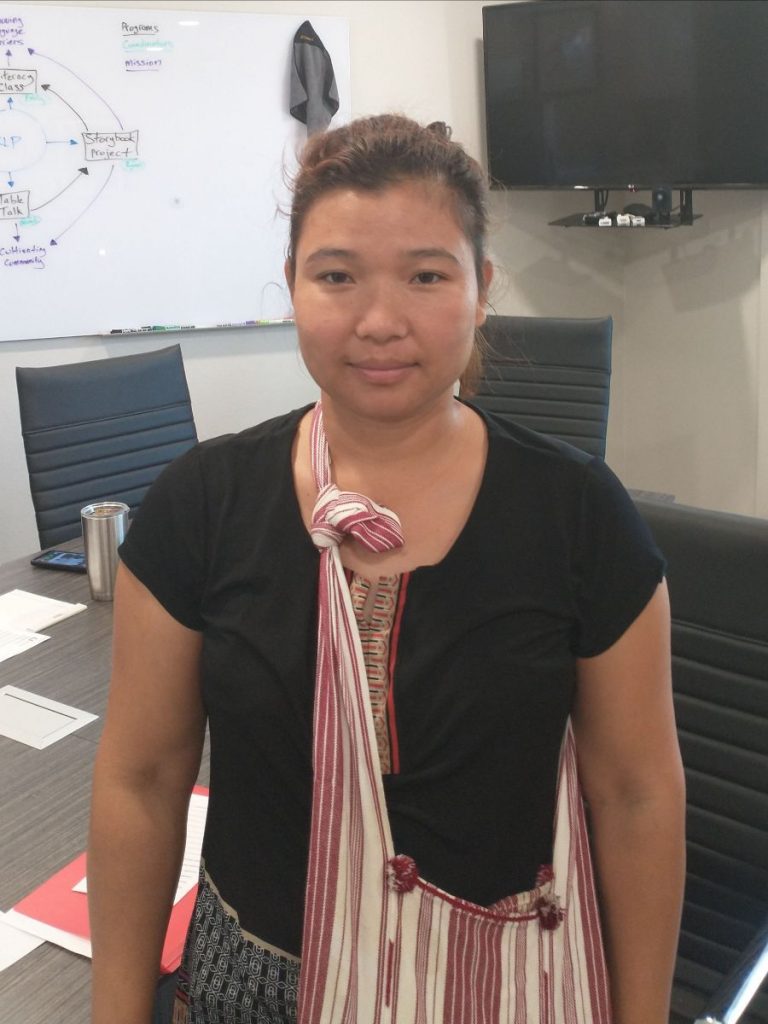 Have you ever sat down to write your own personal history? What would you include? Would you be willing to share it with others when you were done? That’s just what Naw Paw did as part of our Storybook Project. We recently had the privilege of reading her incredible story when she brought her first draft to the office. She had labored for many hours, writing about her life’s journey in both Karen and English before graciously sharing it with us. We have hired Naw Paw to collect stories from people in her community, but before she asked others to share about their lives, Naw Paw decided she would start with her own.

Naw Paw grew up in a peaceful farming village near a river in Myanmar, where her family grew rice and other seasonal foods. She has happy memories of days spent catching frogs and fish in the river for her daily meals. Like many children, she started school eagerly. Unfortunately, her education stopped abruptly in third grade when fighting broke out between the Burmese and Karen armies. This changed the course of her family’s life: the next 20 years were spent taking refuge in the jungle, fleeing from fighting, and spending time in various refugee camps across the border in Thailand. Despite the many sad and violent things Naw Paw has witnessed, she managed to get an education, working hard to finish grade 12 at Noh Bo Academy in Thailand. Naw Paw was not resettled to the US until she was 32 years old, when she came with her husband and two daughters.

After leaving our office, Naw Paw asked her friend Jen about the word brilliant. She had overheard Ryan when he used this word to describe her. “What does it mean?” she asked. Jen told her that it means she is very smart and capable, but also that she is special and shines like a star. Naw Paw smiled, writing down the word and its definition in her journal. For someone who was so desperate to succeed in her education, pushing through every obstacle to learn to read and write in refugee camps strewn about the jungle, Naw Paw was being recognized for her intelligence. What must that feel like, to be praised in this public way for the first time? Now she has a job that values her experiences and abilities, building her confidence and position as a community leader. You have heard us talking about the Storybook Project for a while now. We are beginning to see some of the beautiful fruits of our labors as the first stories come trickling in. We’re blessed to find new partners like Naw Paw—as well as her translation helper, Chu. Chu recently moved to Amarillo and called our office to see how she could get involved as a volunteer. She is a first generation Burmese-American, fluent in both Burmese and English. Incredibly, she is pursuing a PhD in linguistic anthropology from the University of Colorado Boulder, and she is passionate about ethical storytelling. She moves to Amarillo just as we’re beginning a Burmese storytelling project? Isn’t that unbelievable timing?  Naw Paw and Chu are working together to collect and translate stories among more Karen and Burmese people here in Amarillo.