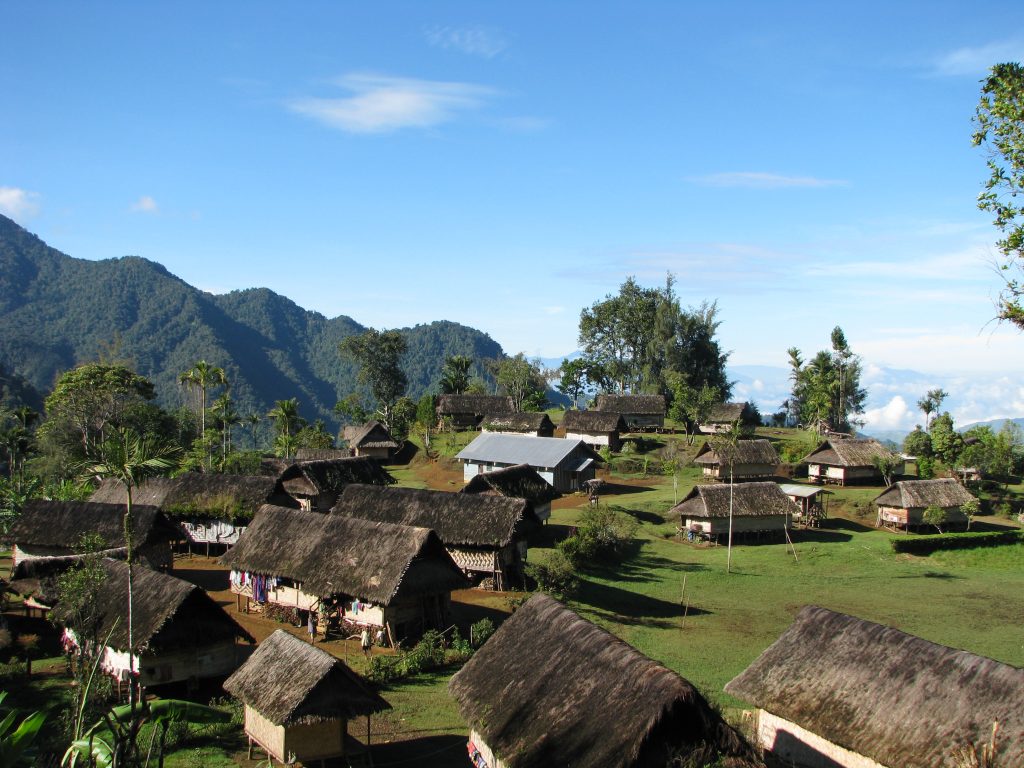 During my time living in Saut, I frequently walked with friends around the perimeter of the village, gazing off into the distance and observing other villages on mountain ridges. On clear mornings, I could see smoke rising through the grass roofs of the homes in the neighboring village of Lemang as its residents cooked breakfast. On clear afternoons, my friends could use mirrors or smoke—or they could whistle particular tunes—to communicate across the ravine. If it wasn’t for the canyon between us, I would have been fooled into thinking Saut and Lemang were the same place. Family ties were strong between them. The histories were shared. The language was identical.

Here’s what’s strange though. In order to actually visit Lemang, I had to hike down 2,000 feet in elevation, cross a river, and then hike back up to a mile high in elevation. Healthy villagers could make the trek—crossing waterfalls, descending vines, traversing dense rainforest, rebuilding broken bridges, scrambling over steep rock faces—in about three hours. Even though the two villages could communicate with whistles and smoke, it was an all-day affair to shake hands with one another.

During those arduous hikes, I would listen as young boys retold the history that connected the two villages. They’d remind me of important names, and warn me about topics to avoid. Basically, we used the travel time to approach Lemang as learners. On the surface, Lemang looked the same to me, but over time, these two separated communities had grown apart in various ways as they established different habits and developed different values. For example, Lemang learned to appreciate decorating their houses, because its younger residents made frequent trips to town to buy batteries (the acid from batteries was used to decorate the bamboo panels of their houses). Lemang also learned to build complex bamboo water distribution systems, because at some point their distance from clean water had led to the death of numerous people. Saut, on the other hand, was older, more established, and overflowing with natural spring water. They spent their time caring for what they already had, rather than engineering new things. The two villages were different and, increasingly, so were the people. Those long hikes prepared me to approach Lemang Village as another culture. The longer I lived in Saut, the more I valued the physical distance which separated those communities. I needed that time to prepare to understand those people.

Our helicopter flights out of the village were always bewildering, because as we rose higher and Saut grew small beneath us, we could quickly see dozens of other villages speckled across mountain ridges. Once, we landed in one of those villages to carry supplies to another translator. Villagers mentioned that they had previously made the journey by foot over a difficult three days. Much to my shock though, our flight lasted less than five minutes! Five minutes by helicopter, or three days by foot. That short helicopter flight would have you believe that they were only five minutes away. In reality, that village was years away from me being able to enter into their world with understanding. It takes much longer to arrive at a culture than a place.

It takes much longer to arrive at a culture than a place.

Throughout our time in PNG, I was frequently confronted with the strange reality of modern travel. We’d travel across the entire planet, from Houston to Los Angeles to Sydney to Port Moresby… In less than a day, we would be using a different currency in a different land with different foods. Beneath those shallow representations of culture, we’d be facing a world that valued group identity over individualism. We’d sit down with people who did not compartmentalize their spiritual lives from their physical bodies. What I hope I’m expressing is that Papua New Guinea is, in an infinite number of ways, a different world than America. It took us many years to be capable of standing on our own two feet there. We had to learn the language and appreciate the customs. We had to face culture shock and adjust our value systems in order to survive. Those lessons are difficult and painful! Papua New Guinea is many years from America, but commercial jetliners have us believing that it’s only 24 hours away. In the past, travelers would spend many months at sea adjusting their hearts before arriving halfway around the world, and even then it wasn’t enough time. Again, let me reiterate that it takes much longer to arrive at a culture than a place.

Modern travel is a liar. Don’t be fooled into thinking that physical distance is the greatest obstacle to ‘arriving’. It absolutely is not. Our modern technologies have fooled us!

Modern travel is a liar. Don’t be fooled into thinking that physical distance is the greatest obstacle to ‘arriving’.

When I get on social media these days, I’m aware of the same principle. Remember how the villages of Saut and Lemang looked the same to me, but my friends would help me to see and appreciate the deeper differences? I needed those three hours with cultural insiders to prepare myself not to automatically call different ‘wrong’. Yet here in our comfortable homes we compulsively grab our phones, tap a glowing screen a couple times, and we’re transported into another living room that’s years away from us. How long would it take you to study that person—understanding their history, recognizing how the terms they use are laden with nuance, valuing their strengths, coming to terms with their weaknesses, seeing that they are a product of a culture that is so very different from your own? Even if they live in your city, their experiences are not yours.

Yet here in our comfortable homes we compulsively grab our phones, tap a glowing screen a couple times, and we’re transported into another living room that’s years away from us.

When you open Facebook, are you ready to confront another culture? Have you done the work? If not, you’re jumping into Lemang without that crucial three hour hike. You’re doing in seconds what should take you months, if not years. Learn to recognize that just because you have access to someone, does not mean you have made the whole trip into their world. Don’t be fooled by modern travel.

Learn to recognize that just because you have access to someone, does not mean you have made the whole trip into their world.